Skip to content
Typically in the morning or a few hours after the sun has risen.

Now, poultry farmers raise hens for various reasons. Some of these reasons include getting produce, such as eggs and meat, and keeping them as pets. To those raising their hens for produce, especially eggs, then one question you might ask yourself is what time of day chickens lay eggs.

To answer this question, let me say that chickens mostly lay eggs in the morning or a few hours after the sun has risen. So, if you check the nesting boxes a few hours after dawn, then you won’t miss finding a fresh egg waiting for you.

But, collecting a fresh egg every morning doesn’t end the discussion. If you’re a curious farmer, then you’ll definitely need to understand the anatomy of egg production and what exactly triggers the egg-laying process. That’s exactly what we’ll be discussing in this short guide. 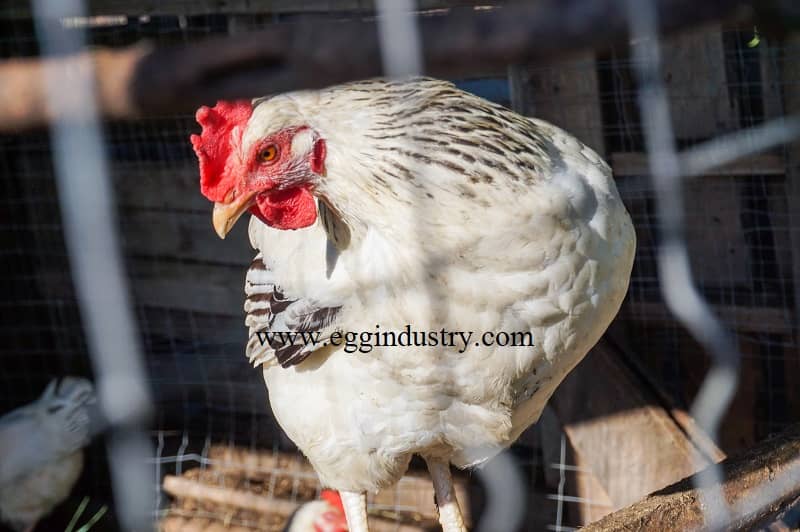 On average, most chickens begin laying eggs at the age of 16-20 weeks. However, the issue of egg laying is hugely dependent on various factors, some of which we’ll discuss below.

The first factor is the breed. If your chickens are dedicated egg-layers, then you’ll expect them to begin laying eggs very early. A good example is Rhode Island Reds, Red Comets, Cinnamon Queen, Leghorns, Wyandottes, and Plymouth Rocks, which start laying eggs around this period.

On the other hand, some breeds begin laying eggs at a much later stage around 6 months or 24 weeks. Some of them include the Jersey Giant, Orpingtons, Brahmas, Silkie, and sometimes the Easter Eggers.

Another factor that determines the age at which your hens start laying eggs is the time of year. Now, most breeds start laying eggs around 4 months. However, this mostly happens during summer when there’s sufficient sunlight to aid in egg formation.

However, during winter, the same breeds delay a lot until the winter season is over for them to start laying eggs. This means that your hens might end up laying their first eggs at 6 months of age.

When Do Chickens Lay Eggs- Day or Night? 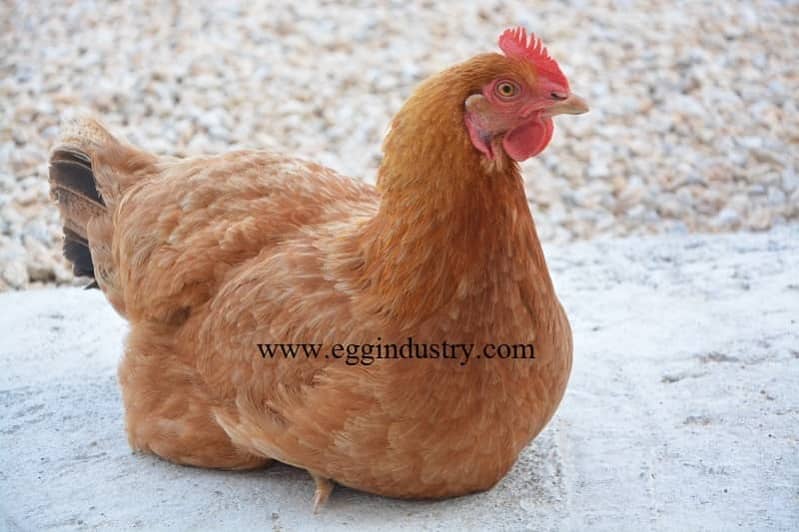 If you’re a newcomer in poultry farming, then it’s obvious to ask when do chickens lay eggs day or night. At least this will help you to determine when to expect an egg in the coop. Now, we all know that chickens are morning creatures. So, when it comes to laying eggs, these birds will probably gift you with an egg either in the morning or during the day.

You see, a hen’s reproductive cycle is hugely influenced by light. Therefore, the amount of hours a hen is exposed to sunlight will determine its egg production.

Something else to note is that hens have an egg production interval of approximately 25-26 hours. They also don’t lay eggs at exactly the same time from one day to another. So, supposing your hen laid an egg at 7 AM Monday, then the next egg will be around 10 AM Tuesday, 12 PM on Wednesday and around 2 PM on Thursday, and so on.

Lastly, chickens don’t lay eggs at night. So, in case the egg is fully formed at night, then they will have to wait until its morning for them to lay the eggs.

Checking Time of Nesting Box for an Egg

If you’ve built your chicken coop with a nesting box, then your hens will probably lay eggs in it. Now, as we mentioned earlier, hens have an egg production schedule of 25-26 hours. That means you’ll expect to collect an egg at least 6 hours after sunrise. That said, the best time to collect eggs in the nesting box is in the afternoon and 4 PM at the latest.

Otherwise, leaving the eggs to sit for too long can cause a couple of problems. One, a broody hen can become too defensive if she’s allowed to sit on the egg for long and two, a chicken might decide to eat the egg causing it to break. 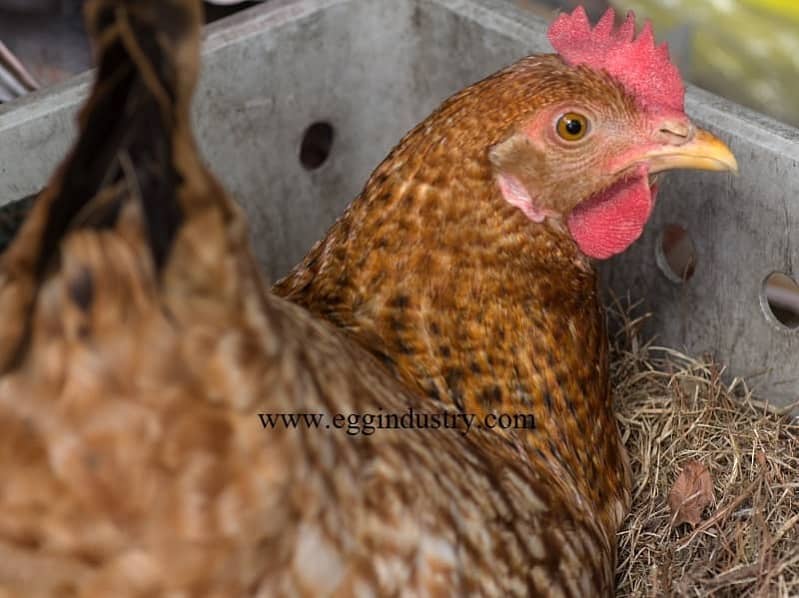 If you’re aware of when do chickens start laying eggs, then you should prepare the nesting boxes early enough where pullets will lay their first eggs.

To guarantee your hen’s comfort when laying eggs, make sure the nest box is placed in a dark quiet place and is elevated. Also, make sure it has a layer of bedding cushion and a lip on the edge to prevent the eggs from rolling and falling.

Do Chickens Lay Eggs Without a Rooster?

Yes, they do. Chickens will lay eggs with or without a rooster. In simple terms, a rooster doesn’t interfere with the egg-laying process. However, the type of eggs you’ll get here are unfertilized meaning they’re only meant for consumption. But, if you need fertilized eggs to hatch, then that’s when you’ll need to add a rooster to your flock.

How Many Eggs Do Chickens Lay Daily? 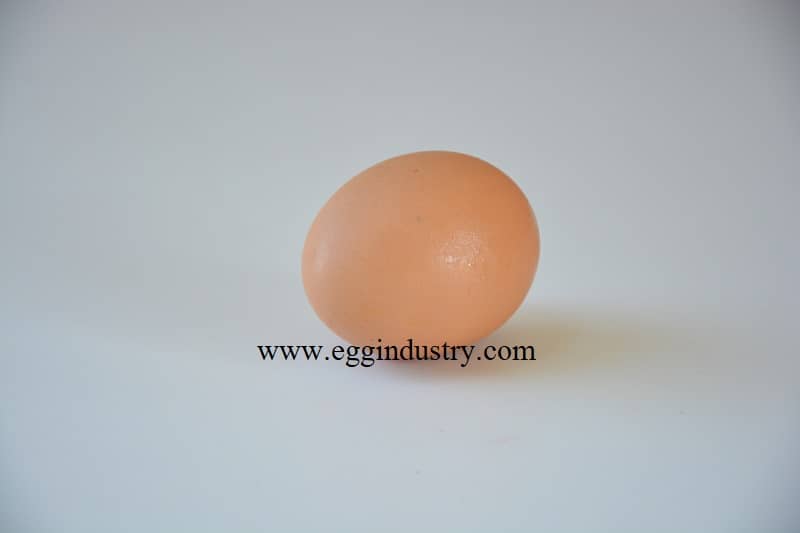 In most cases, hens take at least a day to lay an egg. This means that your hen will lay an egg and then start a new cycle again. With enough light exposure, another egg will be ready the next day but a few hours later than the previous egg.

Do Chickens Lay Eggs in the Winter? 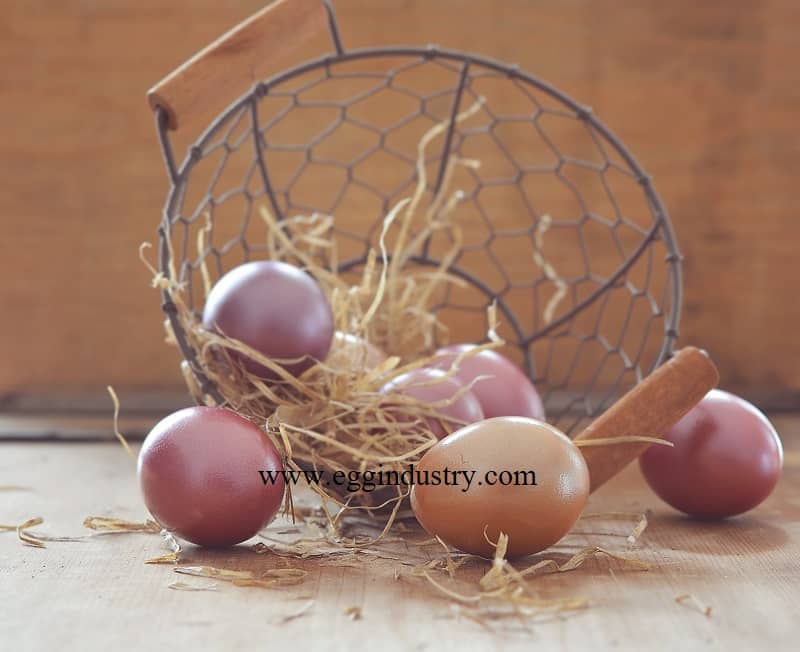 During winter, most chicken breeds utilize this time for molting and re-growing new feathers. Since a lot of energy is needed for this process, most chickens fail to multitask hence keeping their egg production low.

However, if you’re an enthusiast poultry farmer, there are various methods you can employ to increase your chances of having fresh eggs during winter. One of them is raising cold hardy chickens that can survive the cold winter weather. Some of the breeds you can consider include Plymouth Rock, Australorp, Orpington, Rhode Island Red, and Delaware among others.

Another method is using artificial lights to prompt your chickens to lay eggs. Although this method works, it’s wise to research further to ensure it doesn’t interfere with your specific chicken breed.

When Do Chickens Stop Laying Eggs? 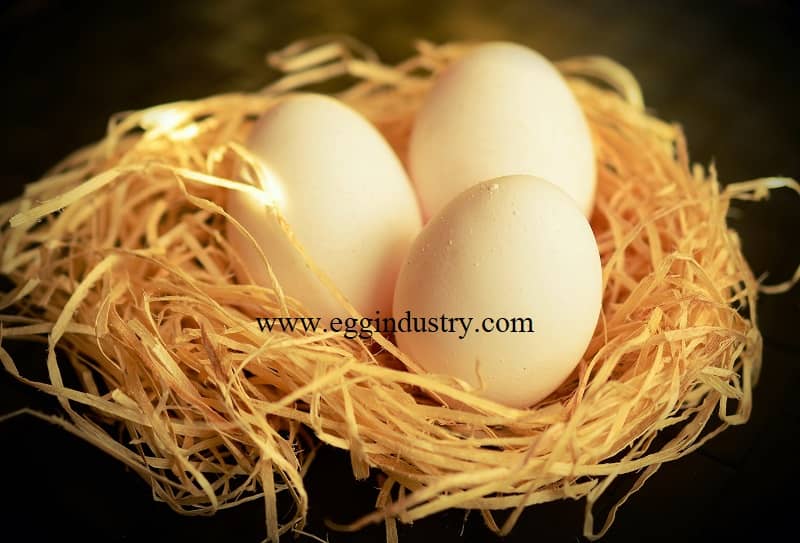 Now, most chickens are productive in their first two years laying an estimated 250-280 eggs annually. However, production lowers by 70% after the first two years and 60% after four years. From there, your hens will lower production even further as they age until they die. This mostly happens up to 10 or 12 years at most.

How Do Chickens Produce Eggs? 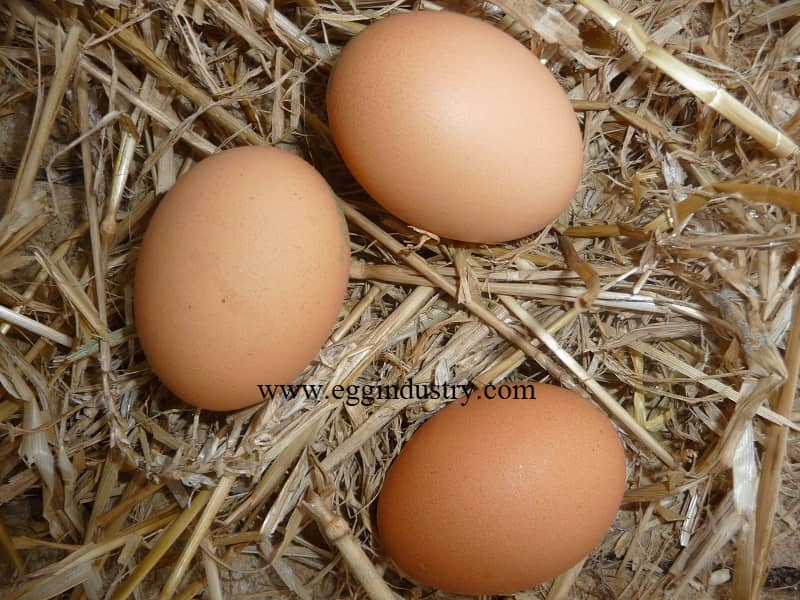 Egg formation begins when the ovum inside the ovary is mature enough to be ovulated. This mostly happens when a pullet is 18 months old. So, once a yolk is developed, it’s released into the infundibulum in a process that takes ½ an hour.

The yolk then travels through the reproductive truck to the magnum where the egg white is formed. The egg white consists of a clear protective casing called a vitelline membrane. This usually takes 3 hours.

Next, the egg travels to the isthmus where the albumen, inner and outer shell membranes are added. Also, this is where the egg picks its famous oval shape. This takes only an hour.

The egg now enters its final stages where it travels to the uterus, commonly known as the shell gland. This stage is where the eggshell and the eggshell pigment develop. This stage takes the longest time approximately 20 hours. From there, a natural lubricant is added to the egg as it exits through the cloaca.

Have you ever picked eggs from the nest boxes only to realize some of them appear to have no shells? Well, if you’re a victim, then you must have wondered what exactly caused the problem. You see, shell-less eggs are quite common among chickens. In fact, some hens lay eggs with soft shells and others with partially developed shells.

Shell-less eggs are eggs that are fully developed but are held together by a pair of membranes instead of a hard shell. In most cases, this condition is caused by several factors, which we’ll discuss here. 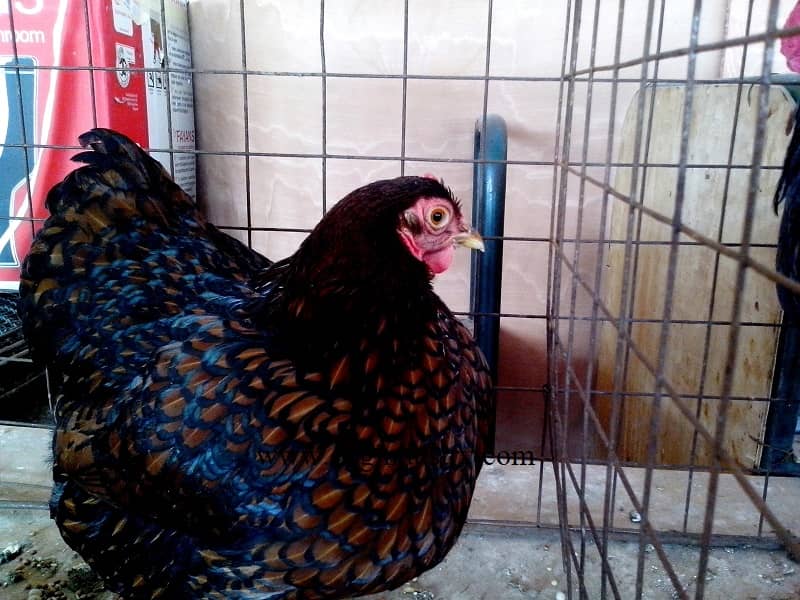 Q1. What Color Eggs does a Chicken Lay?

Another common question besides when do chickens lay eggs day or night is what color eggs chickens lay. Now, the answer to this question depends on the breed and genetics of individual hens. While some hens lay brown eggs, others lay white eggs while others lay colored eggs.

Therefore, if you’re looking to determine what color eggs your hen lays, then you should first know its exact breed.

Q2. Which Chickens Lay the Most Eggs?

Q3. My Hens Have Stopped Laying Eggs in Summer. What’s the Problem?

Now, most chickens are not good year-round egg producers. During winter, most of them instinctively halt the egg production process assuming that raising chicks in cold conditions will have little success in their survival. Well, that’s clever. However, imagine it’s during summer and your chickens suddenly stop laying eggs.

If that’s what you’re going through, then it’s alarming as the winter season is not to blame. So, what might be the problem?

So, do chickens lay eggs at night? Well, this guide has answered this and several other questions you might have regarding egg production. We’ve also discussed the egg laying process, which we think is essential in determining the best time to visit your nest box to pick the eggs.

But other than that, you must learn the signs hens give when they’re about to lay eggs to ensure that the eggs don’t sit in the nest boxes for too long. 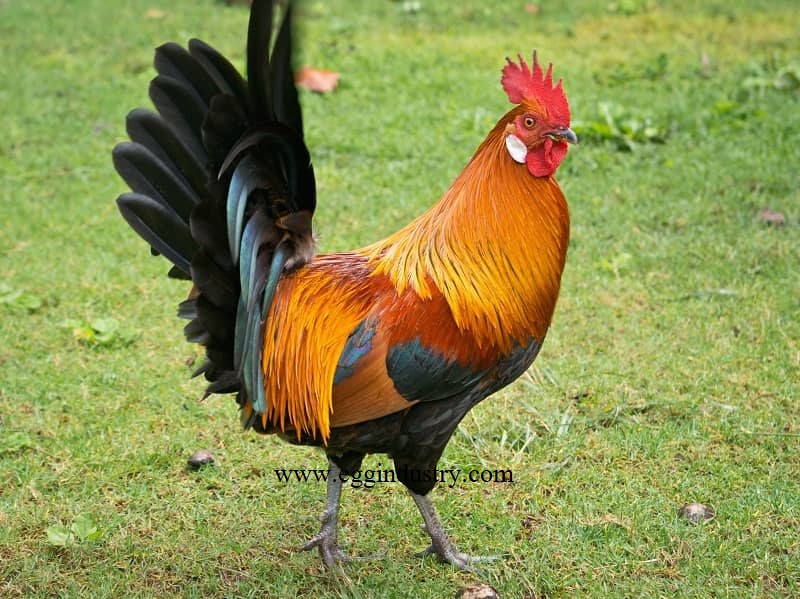