Skip to content
A young male chicken is called “Cockerel” depending on the age.

The world of chickens is vast with a menu of names, terms, and terminologies to learn. Learning some of the common terms is essential as a poultry keeper as it helps you to describe these feathered pals with more precision. So, what is a young male chicken called? Well, a young male chicken can be called a chick or a cockerel depending on the age.

You see, when a male chicken is very young, then it’s basically a chick. When it becomes a juvenile, it’s called a cockerel and when it’s mature enough to start mating, it becomes a rooster.

Now, if you’re a newcomer to all things chickens, then these vocabularies can be confusing. Since you need to learn to communicate effectively with other chicken keepers, veterinarians, and chicken suppliers, this guide will explore the various terminologies that are used to describe a young male chicken.

Unless you’re dealing with sex-links chickens, determining the gender of day-old chicks is quite difficult. For this reason, baby chicks are collectively referred to as chicks regardless of their gender. They’re also called peeps, though this is an informal name that refers to freshly hatched chicks.

The reason why they’re nicknamed peeps is due to the soft chirping sound they make when they hatch. This sound usually brings joy to most chicken keepers as it is an assurance that your chicks have hatched successfully. So, without wasting much time, let’s highlight some names that are used to refer to baby chicks. 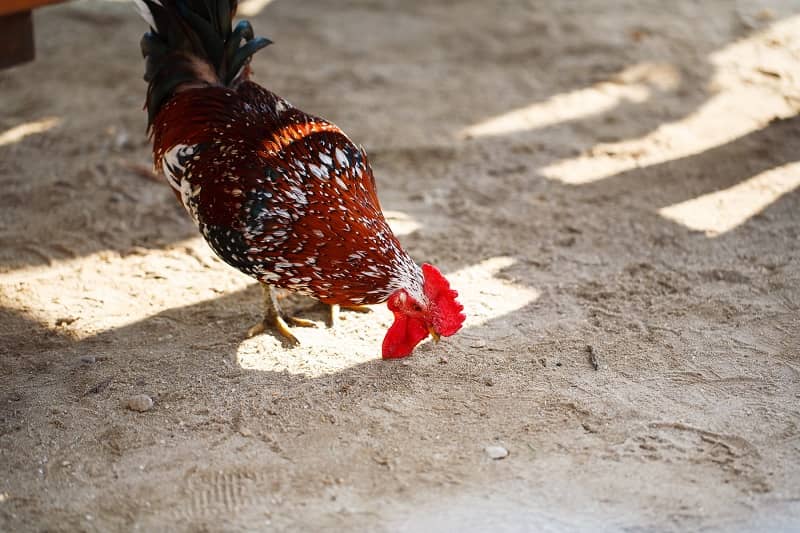 Now, your male chick will reach maturity at the age of 4 – 5 months. During this time, he will develop physical features that are different from those of his female peers. So, are you searching for a male chicken name or term? Well, here are some options.

Just like humans and other animals, chickens have a collective noun or term that’s used to describe them. So, instead of just using one noun, you can make your English look advanced by using any of the five collective nouns we’re going to highlight.

Despite not laying eggs, roosters can serve as great companions to your laying hens. Their presence speaks volumes as they are protectors of the flock. Based on their behaviors, sometimes it doesn’t hurt to give your rooster a male name. As for me, I have a young male chicken called Hercules. This name came after his authoritative strong nature and ability to defend the flock.

That said, this section will select several funny names based on famous comic people from movies, television shows, and politics among other areas.

Hen vs Chicken vs Rooster

Now, the chicken is a familiar bird that serves as a popular domesticated fowl in the world. But, despite being a common bird, most keepers tend to confuse some of the terms thus using them interchangeably.

How Do You Tell a Chicken Is a Rooster?

If you happen to buy straight-run chicks from a hatchery, then you’ll have to separate the males from females at some point. This is important if you’re planning to raise a flock of egg-laying hens only or if your local laws don’t permit crowing roosters in the neighborhood.

In most cases, you’ll have to wait until 2 – 3 months before you can notice physical changes with your chickens. Some of the fail-safe areas you can explore include the comb and wattles, the feathers, the plumage, the size, and the behavior.

Starting with the comb and wattles, those of males will grow faster and will be larger and redder than those of female chickens.

If you observe the behavior, you’ll notice that your young boys will appear to be rowdier, vocal, and quite aggressive than pullets. Finally, roosters will appear to have brighter and more beautiful plumage than that of pullets.

What Is a Straight Run Chicken?

If you’re buying chicks from a hatchery, then there are some terminologies you need to learn. One of them is “straight-run chickens”. In definition, straight-run chickens are those chicks that are unsexed. So, here you can’t determine the sex meaning you’ll end up with a mix of males and females.

The chickens can be from any breed and must be baby chicks. So, here, you can’t refer to adult chickens as straight-runs as they’re already old enough to reference their sex. So, what are some of the pros and cons of buying straight-run chickens from hatcheries?

So, here, we’re left with just one term, which is “a flock”. The term flock refers to a group of chickens regardless of their age and gender. So, whether they’re chicks, juveniles, or adults, the correct collective noun that describes a group of chickens is a flock.

In the world of chickens, there are many terms that are used to describe them. But, have you ever thought of another name for chicken? Well, to make it easier to communicate with hatcheries both locally and online, chickens can be referred to as poultry, domestic fowls, feathered friends, juveniles, pullets, roosters, hens, capons, and cockerels among others. Most of these names will depend on the age and gender of the flock you’re raising.

Q2. What’s the Difference Between a Rooster and a Cockerel?

We’ve also listed some common collective nouns that are used to refer to chickens as well as added a few funny male names that can be used to name your roosters depending on their behavior.

1 thought on “What Is a Young Male Chicken Called? Explained Details”