Although there are many chicken breeds around the globe, most of them share the same characteristics as their 10,000 years ancestors, the jungle fowl. While most chickens undergo the usual annual molt, some breeds have a rare non-molting gene that causes their tails to grow throughout their lives. Though few, most of these long-tail chickens have a Japanese heritage where they’re considered indigenous.

Now, tails play different roles in chickens. On the ground, tails allow your chickens to maintain optimal balance when walking or running. In the air, tails act as radar where they maintain the upwards, downwards, and sideways movements of the birds.

In the case of roosters, their tails and flashy brightly colored feathers are essential in helping them attract females for mating. The feathers also allow them to dance and impress their “women”. Lastly, tails, such as those possessed by long-tail chicken breeds are fascinating and attractive. Such tails allow people to raise these chicken breeds for ornamentation and aesthetic purposes. With that said, this short guide will discuss at least 6 long-tailed chicken breeds. 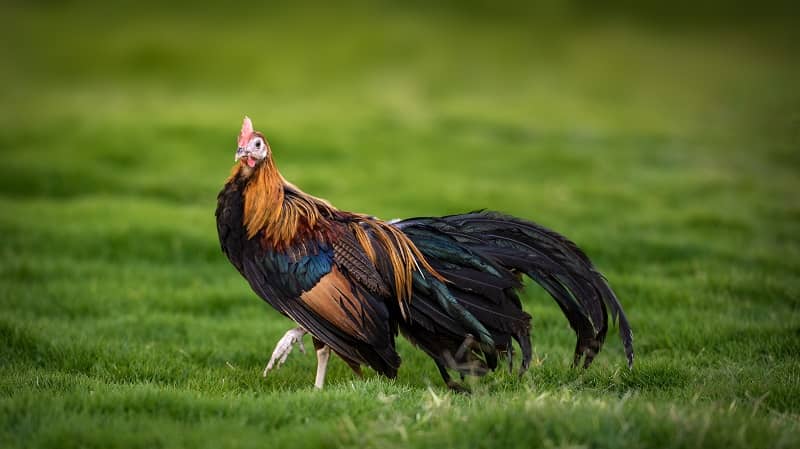 The Phoenix chicken is a popular long-tailed chicken breed that’s hugely hailed for its great ornamental value. This bird has a long flowy tail that grabs the attention of anyone who sticks his/her eyes on it. Developed in German by Hugo du Roi, the Phoenix chicken was a result of breeding a Japanese Yokohama long-tailed chicken breed with other breeds such as the Leghorn, Modern Game, Old English Game, and the Malay.

The Phoenix is a chicken breed that doesn’t molt often thus allowing it to develop long tails that reach 18 to around 30 inches. Though developed in German, three variations of this chicken breed have gained recognition in the USA. They include the Silver Phoenix chicken, Black Breasted Red, and Gold Phoenix.

About its temperament, the Phoenix is a breed that doesn’t like to be confined but rather allowed to free-range. It’s hardy, attentive, and quite aggressive, and will be happy to start a fight when challenged by others.

The Cubalaya chicken is a breed that traces its roots in the Island country of Cuba. This chicken was initially raised for meat and eggs until later when it doubled as an ornamental breed. According to history, no one knows exactly which chickens were bred to produce the Cubalaya.

However, most people suspect that this breed was a hybrid of a feathered chicken and an Asiatic game fowl brought by the Spaniards during the colonial era.

Now, speaking of the appearance, the Cubalaya is a breed that resembles the long-tail phoenix chickens in terms of a fancy-looking long tail. Everything from its red pea comb, earlobes, wattles, and long flowing feathers is just exquisite.

Regarding their temperament, the Cubalaya chicken breed is polite, friendly, and very easy to tame. The roosters are aggressive and very assertive towards other chickens and are mostly bred for cockfighting. The hens are excellent egg layers and they mostly go broody making them quite useful if you’re looking to hatch some chicks.

The Onagadori chicken is another breed that’s famously known for its extremely long tail. With its origins in Japan, in the province of Nagoya, this rare chicken breed has very interesting characteristics that make it one of the most expensive chicken breeds. Back in Japan, this bird was raised as a pet by landowners and the Samurai and it was used to symbolize the owner’s status and wealth.

Today, the Onagadori chicken breed is getting scarce and quite rare. However, despite its scarcity, we can’t miss mentioning a thing or two about it. First, the Onagadori has a flowy tail that has an average length of 4 ft. It tops up the long tail with a brightly colored plumage that contains shades of red, black, white, blue, and green.

About its personality, the Onagadori chicken is a breed that has very unique behavioral trails. This bird is considered intelligent with very sharp memory retention. The bird rarely gets broody but has some of the best motherly instincts.

It lays fewer eggs, around 100 annually, and it mostly weighs around 3-5 pounds making it less ideal for meat production. For these reasons, the Onagadori is hugely raised as an ornamental bird due to its striking appearance. 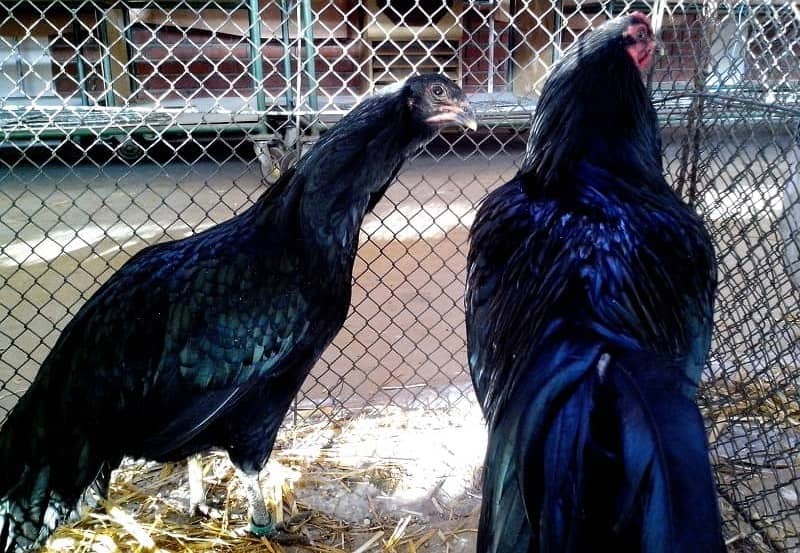 The Sumatra chicken is a breed that originated in three Indonesian Islands, Sumatra, Java, and Borneo. This bird was first evidenced in the 1850s when it was exported to other countries such as the US and Germany. There, the Sumatra was crossbred with other fighting chicken breeds and was used for cockfighting competitions.

Regarding appearance, Sumatra is among the chickens with long tail feathers. This bird is medium-sized with roosters weighing around 5 pounds and hens around 4 pounds. Since it resembles a bantam, Sumatra lays small eggs, which are around 100 annually.

About its temperament, Sumatra is quite flighty and very shy. In fact, it prefers to forage under bushes and shrubs to maintain a low profile against sky predators. Lastly, the Sumatra was accepted as an official breed by the APA in 1883 where it’s now raised as an ornamental bird.

The Yokohama is another chicken breed that bears a long tail. This chicken is mostly reared for ornamental purposes rather than for meat and egg production. Although it’s known as the Yokohama, this breed was not developed in Japan but rather in Germany. The name Yokohama actually represents the Yokohama port in Japan where it was imported.

Now, looking at the Yokohama, you’ll notice that it’s very similar to the Silver Phoenix chicken only that it has a walnut-shaped comb rather than a large single comb found in the Phoenix. But, other than that, everything else including the temperament is similar to the Phoenix.

About the looks, the Yokohama is available in white and red-saddled colors (recognized colors) though you’re likely to find other colors such as silver duckwing, black-red, black-tailed buff, and golden duckwing.

Speaking of personality, the Yokohama is a docile and very gentle bird. The chicken is friendly and easy going making it a perfect fit for a pet. They weigh around 4.5-3.5 pounds making them small to medium-sized breeds. Hens lay around 80-90 eggs annually making them one of the worst egg layers.

Finally, we have the Asil or Aseel chicken breed. Now, the Asil breed is not like the rest of the chickens with long tail feathers we’ve discussed. Its body isn’t fluffy and the tail isn’t long like the rest of the breeds we’ve listed. Nonetheless, this bird has some eye-catching features that are worth discussing.

First, the Asil chicken stands confidently with a distinctive stance that reveals its cockfighting might. They come in two variants, one with short tails and the other with long beautiful tails. About their personality, the Asil breeds are exactly what you’d expect from a first impression—they’re aggressive.

These birds are not close to being gentle and calm and will often pick a fight with other chickens in the flock. In fact, if you fail to balance the ratio of roosters and hens, then the roosters are likely to fight each other to death.

Lastly, Asil chickens are not good layers. These breeds hardly produce 50 eggs annually. The best thing about them, however, is that they go broody and they’re protective mothers.

As you can see, long-tailed chickens are considered beautiful and fabulous. Although they’re great assets for ornamental purposes, raising them requires a lot of dedication, which most people can’t manage. One factor that makes it quite difficult to raise these birds is their long tails, which are valuable assets to them. So, in this section, we’re going to list some points on how to care for your long-tailed chicken.

When it comes to housing, long-tailed chickens demand ample space to forage. Due to their long tails, these chickens demand around 10 square ft. of space per chicken. Since most people raise them for ornamental purposes, the coop should have clean bedding to keep their feathers clean.

Feeding long-tail chicken breeds are just like feeding normal chickens. These birds require high protein feeds to keep the feathers strong and healthy. They also require layer feeds with good calcium content for laying hens and chick starters in the case of chicks. Most of these birds enjoy foraging so you need to erect a high fence to keep them safe as they free-range.

Now, all of the birds we’ve listed have long flowy tails. These tails are fluffy and are hence excellent hide points for lice and mites. So, to keep your chickens in good shape, you need to groom them regularly to remove any parasites.

Q1. Do Hens Have Long Tails?

When discussing long-tailed chicken breeds, you’ll realize that most of these features fall in favor of roosters. Most roosters have long sickle feathers that curve upwards. As for the hens, their feathers are rounded and less pronounced.

Q2. What’s the Best Ratio of Roosters to Hens in Long Tail Chickens?

Now, most chickens with long tails are considered gentle and docile. For this reason, most of them require around 10 hens per rooster for the flock to thrive. However, if you’re raising breeds such as the Asil, this one requires extreme care as these birds are known to be very aggressive, especially when it comes to roosters.

So, there you have it. If you’re a serious poultry farmer looking to add an ornamental breed to your flock, then here are 6 incredible breeds you can consider. These birds are beautiful, elegant, and very impressive. However, when it comes to raising them, you must consider a few factors such as the feeding, housing, and grooming demands. Thankfully, this guide has discussed some of these demands making things easier and more simplified.