If you’re raising a flock of chickens for the first time, learning all things chickens is important if you want to familiarize yourself with these docile birds. Some of the interesting things you need to learn are what chickens eat, how to keep them healthy, how to improve their production, and how to know if they’re stressed or not. But, have you ever sat back and asked yourself this question “do chickens pee?”

Well, one factor that might trigger this question is when you notice too much poop in the chicken coop without the presence of any liquid urine. You see, with other backyard pets, such as cats, dogs, rabbits, and humans, peeing is a call of nature and something you’ll see them doing daily.

But, in the case of birds, no one has ever mentioned seeing them pee. So, do chickens release urine? Well, that’s exactly what we’re going to discuss in this guide.

So, Do Chickens Pee?

How Do Chickens Release Urine?

Now, I believe the above explanation has left you curious wondering how exactly chickens release urine. Just as we mentioned earlier, chickens use a very different system to excrete urine from their bodies. As humans, chickens have two kidneys that serve as the backbone of their excretory system. The kidneys play three key roles in chickens that include balancing electrolytes, sustaining water levels, and removing all metabolic wastes from their bodies.

Without a bladder and a urethra, urine from the chicken’s body is rerouted back to the large intestines where water in the urine is absorbed leaving solid uric acid behind. This white pasty substance is then combined with poop and released via the cloaca.

Now, where does the entire process begin? This is where things get interesting. But, first, you need to note that the kidneys are very crucial in a hen’s excretory system. In case they sustain any damage, they can easily swell and fail to function properly.

Sometimes, they can suffer from nephritis, which occurs when kidneys are unable to filter waste from the blood. This condition is serious and can cause death to your flock.

Now, the kidneys start by filtering metabolic wastes such as urine from the blood. Since there’s no bladder to store the urine, ureters are used instead. Ureters are narrow tubes that run from each kidney down to the cloaca.

So, they serve as special passageways for transporting urine from the kidneys to the cloaca. As you already know, the cloaca is the vent at the back of a chicken’s body where the intestinal, genital, and urinary tract are located.

Once the urine is transported to the cloaca, it’s then rerouted to the large intestines where reverse peristalsis occurs. Reverse peristalsis is when excess water from urine is re-absorbed back to the body leaving behind a low water content whitish paste that contains concentrated uric acid. This white paste is now released via the cloaca alongside the feces.

So, in case you’ve been asking how chickens pee, then this detailed explanation is enough to give you an absolute answer.

How Often Do They Pee and Poop? 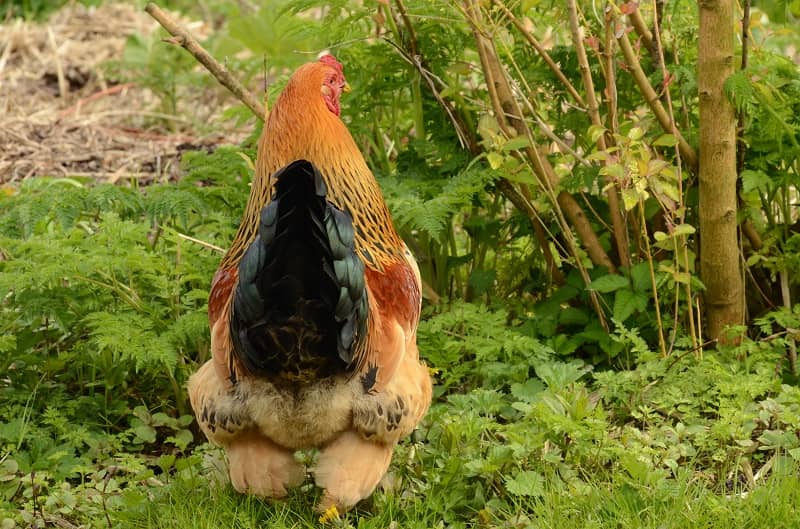 Now, chickens are frequent poopers. However, two main factors affect how often they poop. These are the size of the bird and the feeding program.

Starting with the size, smaller chickens such as baby chicks tend to poop more frequently than adult chickens. In most cases, chicks poop every 10 – 15 minutes. As for adult chickens, they usually poop less often, which can be 20 – 25 minutes.

The second factor is the amount of feed you give your chickens. If your chickens are frequent eaters, such as broiler breeds, then they’re likely to poop oftentimes as compared to regular breeds.

How Does Not Producing Liquid Urine Affect Chickens?

Before we get deep into the anatomy of birds, let’s first imagine chickens can pee. Since their excretion system is similar to that of other flying birds, birds flying over your heads would cause a real mess if they urinated.

Also, cleaning a coop containing a mixture of urine and poop would be tough. In case you’re raising a large flock, your coop would appear messed up so badly. Failure to clean it often would attract dangerous bacteria that might affect your chickens negatively.

Back to reality, chickens don’t pee because they don’t have urinary bladders. Since bladders store urine, the stored urine can make a bird heavier making it difficult to fly. Although chickens might not be affected (since they don’t fly), other birds can suffer greatly.

Do Eggs, Pee, and Poop Come Out From the Same Orifice?

However, you need to understand two terms which are “passing through” and “exiting from”. Pee, poop, and eggs exit from the same orifice, which is the cloaca, but they don’t pass through the same channel as they exit.

To those asking do chickens urinate, then the answer is yes. However, the urine passes through the ureter where it goes to the cloaca and then to the large intestines for reverse peristalsis. Away from the cloaca, there’s the colon, which is used to excrete feces. After the colon, there’s the vent, which is responsible for transporting eggs to the cloaca for egg laying to take place.

To simplify this, the cloaca is a cavity that has three chambers in it. They include the ureter for passing urine, the colon for passing feces, and the vent for passing eggs. During egg laying, the contraction of the vent closes the colon to allow the egg to pass. As a result, the egg is protected from getting any poop during egg laying.

If you own a flock of chickens, understanding chicken dropping is important as it allows you to distinguish normal from abnormal droppings. In most cases, normal droppings are green or brown with shades of white.

But, while these colors are considered normal, there are other colors you might see such as yellow, black, and tan. These colors are quite common and they mostly vary depending on the diet, time of year, and the overall health of your chickens.

Other than the color, normal chicken droppings are usually firm. So, if you notice runny droppings with abnormal color, then it means your chicken has a problem that needs to be addressed. That said, let’s discuss some of these colors in detail.

In most cases, black stool indicates that your chicken has eaten blackish or greyish elements. Some of these elements include wood ash, charcoal, and blackberries. Another cause of black droppings is the presence of blood on the stool.

On the diet side, yellowish dropping means that your chicken is fed on excess corn or strawberries. In the health sector, this might be a sign of internal worms, coccidiosis, kidney problems, or fowl typhoid.

Most of the time, brown runny droppings are caused by eating foods with excess water. In rare cases, this can be a sign of infectious bronchitis.

Urinary Problems in Chickens and How to Prevent Them

In case you’ve been asking do chickens pee or just poop, then we believe we’ve provided a detailed explanation. With that topic out of the way, let’s now discuss how to prevent urinary problems in chickens.

Now, excretion is a vital process that allows your chickens to remove toxic and dangerous materials from their bodies. Although it’s not common, sometimes the excretion process can malfunction leaving your chicken in grave danger. So, what are some of the ways you can prevent urinary problems? Let’s find out.

Vent gleet is known by other names such as a pasty vent or pasty butt. However, the medical term for this condition is Cloacitis. Now, Cloacitis is a condition that affects the opening of the cloaca causing it to have inflammation and a yellowish-white discharge.

Q2. Can a Chicken Urinate Via the Skin?

This question is quite common to most people who wonder how do chickens pee. Now, chickens don’t pee through their skin. In fact, they don’t even sweat like humans do as they don’t have sweat glands on their skin. Instead, they use the reverse peristalsis process to remove water from urine and leave uric acid behind. The uric acid is then excreted together with the rest of the poop.

Yes, it does. Chicken poop can make good organic fertilizer as it contains an excellent amount of nitrogen. However, before you apply it to your farm or garden, you should give it ample time to decompose. Otherwise, applying wet chicken poop to your plants can cause damage as the plants won’t handle the high nitrogen content.

Q4. How Do You Keep Chicken Eggs Clean?

When collecting eggs, there’s a high chance you’ll find them stained with chicken poop. Although poop and eggs come from the same orifice, the poop on the eggs doesn’t occur during egg laying. It occurs later on after the eggs have stayed for too long in the nesting box.

So, to prevent your eggs from being stained with poop, ensure that you collect them early in the day. Next, keep the nesting boxes clean by replacing the bedding regularly.

Q5. Do Chickens Pee and Poop at the Same Time?

Yes, they do. Chickens pee and poop at the same time. Once water is removed from urine via reverse peristalsis, what is left is a white paste that’s mixed with poop and released via the cloaca.  We’ve already discussed this so I won’t go deep into the details.

All in all, the question of “do chickens pee or just poop?” has been asked frequently by most chicken enthusiasts. Asking such questions is important as they let you understand the important aspects of how a chicken’s body works.

This way, it’s easy to spot various health problems and take the right course of action at an early stage. Now, in reality, chickens don’t pee as humans do. However, these little critters have a complex excretion system that absorbs water from the urine to leave behind solid uric acid pellets that are excreted alongside the poop.

With all that said and done, we believe this short guide has answered the question of whether chickens pee or just poop.