The Barbezieux chicken is a breed that nearly got extinct after the Second World War. Was it not for a small group of farmers that managed to restore it, this breed could have gone straight into extinction? Today, this breed is raised under very strict measures such as giving it enough space, enough open air, and feeding it with an 80% cereal-based feed.

Now, that was just a short description of the Barbezieux chicken breed. If you’re an enthusiast poultry farmer that enjoys raising different breeds, perhaps the Barbezieux might be a suitable pick. This chicken breed is native to France and is recognized as a dual-purpose breed thanks to its excellent meat and egg production.

This breed is hailed for being friendly and excellent in foraging making it a good choice as a backyard chicken. They’re hardy and can adapt to different environments provided extreme care is maintained. Lastly, the Barbezieux is regarded as one of the tallest and mightiest chickens in Europe. It’s one of the best-tasting chickens in France and the whole of Europe. So, with that said, let’s spare some time to learn about the Barbezieux chicken breed to see whether it’s the best choice for you.

A Short History of Barbezieux Chicken 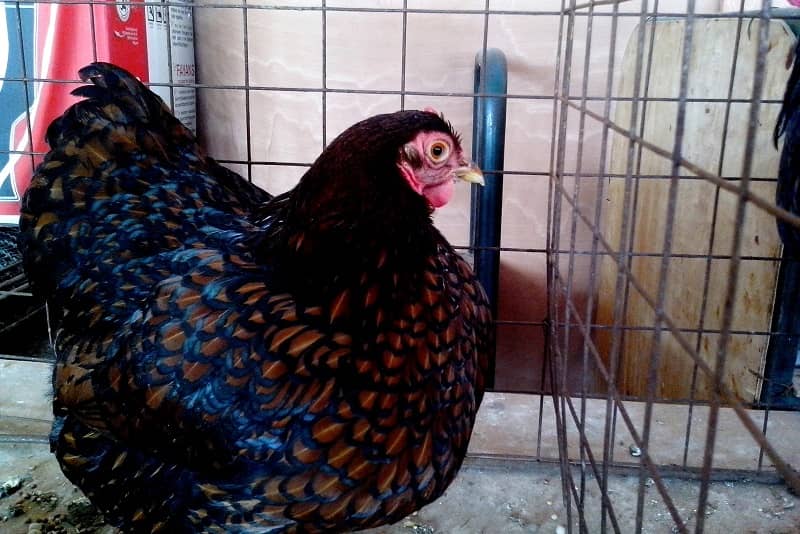 The Barbezieux is an ancient chicken breed that has been around for a few centuries now. This breed was first evidenced in the small town of Barbezieux, south of Charente, in the western parts of France. Some people believe that this breed is related to the Marans chicken breed, as it’s also believed to have originated in the same area.

At first, the Barbezieux was not a popular breed among most people causing a drastic decrease that nearly led to its extinction during the 18th century. Luckily, efforts from a team of chicken enthusiasts restored its population until the World Wars when its population decreased due to the high demand for their meat at the time.

The population of the Barbezieux decreased even further in 1997. This breed could have disappeared entirely was it not for a group of French “conservateurs” who worked together to restore it.

Today, the Barbezieux is hailed for its beautifully golden skin that’s said to have a “fine odeur de froment”. Famous chefs and culinary authors such as Jean Anthelme Brillat-Savarin (author of the book “Physiology of Taste”) describe the meat of the Barbezieux as one “riddled with excitement”.

In 2001, the French food guide, the Gault et Millau recognizes this bird as one of the most delicious chickens you can ever have. 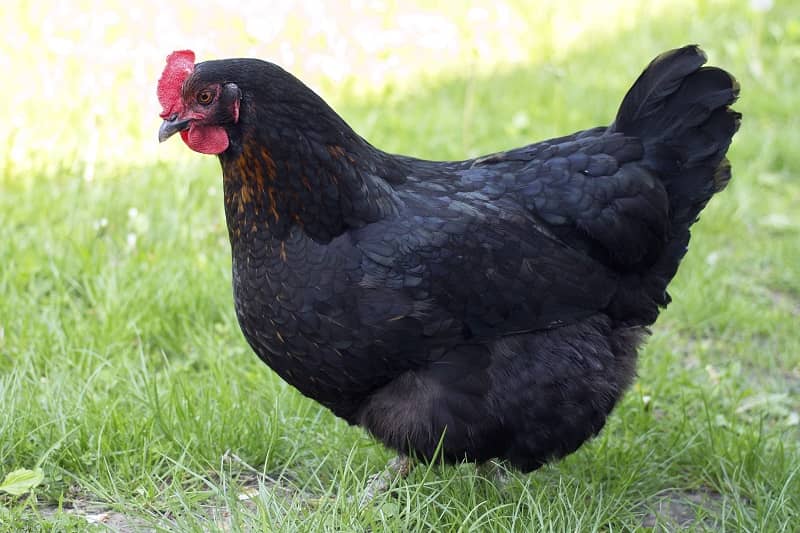 The Barbezieux chicken is one of the easiest breeds to identify. This breed lies at the top of the billboard of the tallest chicken breeds in the world. The roosters can be quite intimidating with a height of 27 inches and 25 inches for the hens. Their bodies are huge and prominent and are quite masculine making them the perfect breeds for meat production.

About the plumage, Barbezieux chickens have a distinctive black color like the Australorps and Black Copper Marans. The roosters have a black plumage that reflects a hue of green highlights when reflected by sunlight.

Just like their bodies, these chickens have large heads and huge combs and wattles. The combs are single with a leafy shape and clear denticles, indicating that this chicken breed is hardy and perfect for hot climates.

The head, the comb, and the wattles have a raspberry color with the hens having slightly slender heads and soft smaller combs that fall on one side.

Besides their reddish heads, these chickens have white earlobes that tend to oppose the red color on their heads. They have big eyes that combine red and brown colors and medium-sized legs that have long shanks and blue tints.

Other than the plumage, Barbezieux chickens have convex-shaped tummies, strong thighs, elongated shanks, and tight feathers that squeeze towards the body. Although French breeders have recorded the standards of this chicken, it’s a shame the APA is yet to recognize it. Nonetheless, the Barbezieux remains to be the largest and strongest chicken breed in the whole of France.

Now, the Barbezieux chicken breed is famously known for its outstanding meat and egg production. In fact, this is the main reason why most poultry farmers raise this breed. About its meat, most farmers, as well as popular chefs and gourmets describe the meat of this bird as having a gamey taste and a beautiful golden color.

In fact, most agree that its enormous size allows a single chicken to provide several servings enough for an entire family.

Regarding egg production, the Barbezieux is capable of laying around 160 – 200 eggs annually. The Barbezieux chicken egg color is white while the size is large weighing around 75 grams each. The best thing about these chickens is that egg production might remain unchanged even in cold weather provided they’re kept warm and comfortable.

If you’re intending to raise these birds for egg production, it doesn’t hurt to learn that hens usually mature and start laying eggs at around 5 – 6 months old. The pullets improve egg laying production in the next 2 – 3 years after which it lowers significantly as the hen ages.

So, to maintain high egg production, you should rotate the aging hens with young egg-laying pullets. Also, the Barbezieux is a breed that hardly gets broody. So, if you’re looking to hatch the eggs, you should have an incubator at your disposal.

One huge advantage of Barbezieux chickens is the large healthy bodies they possess. This makes them hard and highly adaptive to any environment. These birds are low maintenance as they don’t have any specific health issues or major grooming needs like ornamental birds do.

They can adapt to both warm and cold climates without suffering from any major challenges. The only main challenge that seems to cripple them is the issue of frostbites in severely cold weather. Actually, their large combs and wattles usually become easy targets during the winter months.

To check for signs of frostbite, inspect the combs to see whether they’re swollen, pale, grayish-yellow, or grayish-blue in color. To avoid frostbites, insulate the coop and install heaters to keep the chickens warm.

Other than frostbites, the Barbezieux demands some grooming at least once in a while. Here, you should inspect their feathers for signs of parasites such as mites and lice. Lastly, inspect the coop often to remove any germs and bacteria present.

We’ve already discussed the required environment for raising Barbezieux chickens. Things like providing a clean wide coop are essential in ensuring that these chickens remain strong and healthy. Another factor is inspecting them for parasites such as lice and mites.

Now, when it comes to feeding, Barbezieux chickens demand a balanced diet that consists of nutrients, fiber, protein, calcium, and vitamin. Since these chickens have excellent free-ranging instincts, combining formulated feeds with proteins derived from eating insects, seeds, worms, and bugs will keep your Barbezieux healthy and strong.

When it comes to Barbezieux chicks, these ones require extreme care as they’re mostly hatched from incubators rather than broody mothers. So, to lower the rate of mortality and promote good health for the chicks, you should pay attention to these tips.

Q1. What is Meant By a Dual-Purpose Chicken Breed?

A chicken is considered dual-purpose if it can reasonably produce both meat and eggs. A good example of such breeds includes the Black Australorp, Barred & White Rock, Buckeye, Dominique, Jersey Giant, Wyandotte, and the Barbezieux.

Q2. What’s the Life Expectancy of the Barbezieux Chicken?

The Barbezieux is among the few chicken breeds with a long life span. These breeds can live for over 8 years making them among the best. During this time, they’ll give you enough meat and egg production. Unfortunately, Barbezieux egg layers lay the most eggs in their first 3 years after which their egg-laying capability starts to lower.

Q3. What Are Bresse Chickens?

Q4. Is Barbezieux a Recognized Breed?

No, it’s not. The Barbezieux is yet to be confirmed as a standard breed. However, breeders of this chicken have confirmed its standards, which include a powerfully built body, proud stance, high egg production, and black plumage among other specs.

As you can see, the Barbezieux is considered one of the oldest chicken breeds in France. This chicken also happens to be large making it one of the best breeds for meat production. Other than their meat, Barbezieux chickens lay large eggs that are in the region of 160 per year.

Barbezieux chicken egg color is white and mostly weighs 75 grams. So, with that said, if you’re a poultry farmer or an enthusiast intending to add the Barbezieux chicken to your backyard flock, then this guide has provided all the vital information you might need.