When it comes to chickens, everyone has a different opinion on which chicken breed is the best over the rest. While some breeds are popular in most backyards, others are considered rare and unheard of. One of the chicken breeds we’re going to introduce to you today is the Asian Black chicken.

That said, if this is the type of breed you’re dreaming to add to your backyard, then continue reading as this guide has everything you need to know about the Asian Black.

As I have mentioned, the Asian Black is a breed that’s quite rare in the USA. This bird is new and is a great dual-purpose breed that’s raised for both meat and eggs. About its origin, the Asian Black was developed or rather discovered by Hoover’s Hatchery during a trial-and-error experiment.

The reason why it’s called the Asian Black is that one of its parents was a breed from Asia, China, with most breeders and online hatcheries agreeing it was a Langshan chicken. Although this is just a smart assumption, the statement appears to be somewhat true due to the many noticeable similarities between the Asian Black and the Langshan.

The result of this selective breeding was a hardy bird with beautiful black plumage. This chicken has striking black feathers with red and gold flecks on the neck and a bluish green iridescence when sunlight hits its feathers at an angle.

This chicken is also a sex-linked breed that makes it easy to sex male and female chicks. It’s also a hardy, energetic and easy-going bird that adapts to many growing conditions. Although we’ll discuss this later, the Asian Black is a prolific layer that lays around 250 eggs annually. 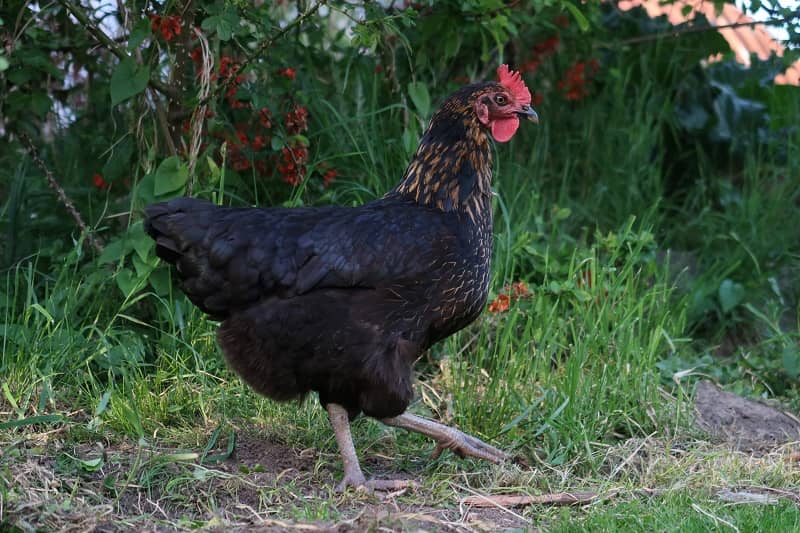 If you’re raising Asian Blacks for the first time, then it’s easy to ask questions regarding their productivity. For instance, you’ll hear poultry hobbyists asking questions such as “How many eggs do Asian Blacks lay?” or “Do Asian Blacks go broody?”

Now, to begin, the Asian Black is a breed that’s raised as a general-purpose bird to produce meat and eggs. However, its commitment tends to lean more on egg-laying where it lays around 250 eggs annually. In fact, its high egg production puts it in the same league as other renowned prolific layers such as the Sussex, Rhode Island Red, Leghorn, and the California Whites.

But, unlike most of these champion layers, the Asian Black is a slow-growing chicken. This means that this chicken will take up to 5 – 6 months before commencing its egg-laying journey.

About the Asian Black chicken eggs, these breeds are known to lay medium-sized brown eggs. When it comes to going broody, the Asian Black will rarely sit on a clutch of eggs. I guess this is one feature of most breeds that lay lots of eggs as they tend to utilize most of their energy in laying eggs other than going broody.

When it comes to meat production, Asian Blacks are not the best table birds. First, these breeds are not known for being fairly large. Secondly, these chickens are slow-growing. This means that they will take a long time to reach slaughter weight. The worst thing about their slow growth is their high feed conversion rate, which means you have to feed them for a longer time as compared to most other breeds.

The Asian Black chicken is a rare bird that doesn’t have a lot of information online. In fact, being a rare bird is one of the reasons why most people confuse it with popular black chickens such as the Ayam Cemani. However, most breeders, especially those in the USA are raising this chicken breed and enjoying its performance in terms of egg laying.

But, before adding or rather introducing the Asian Black to your existing flock, you need to learn about its disposition. Thankfully, this chicken is among those breeds that are considered docile, gentle, and friendly.

Here, most caretakers mention that it has “dog-like qualities” as it tends to get close to its handlers. They are excellent companions that enjoy being held and being given treats often. But, other than humans, Asian Blacks also get along well with other animals. So, when they’re introduced to a new flock, they will never start a fight or interfere with the existing pecking order.

Lastly, Asian Blacks are chickens that know how to socialize with kids. Both hens and roosters are comfortable with kids making them excellent pets. However, just like most other roosters, Asian Black roosters can sometimes exhibit some aggression meaning you have to be alert.

How to Sex an Asian Black Chicken

Now, most keepers prefer to buy chicks from hatcheries when they’re a day old. While this is a smart way of saving costs and preparing yourself for a huge task ahead, there’s usually one huge problem you have to solve—knowing the gender of the chicks. Are you dealing with male or female chicks?

Thankfully, with Asian Blacks, these chickens are regarded as sex-links meaning you can easily sex them when they’re a day old. The chicks are either black or buff while males have a white spots on their heads.

The Black Asian chicken is an attractive breed that has a lot to be admired. This bird is hardy and tolerant to most weather conditions. Unlike most breeds, the Asian Black can be allowed to forage for pasture or be confined inside the coop.

But, despite all the Bells and Whistles, this chicken is susceptible to particular health problems that are common to most other black chickens.

One of them is a bacterial infection called Bumblefoot. This infection occurs when a chicken’s foot is injured and then the wound is exposed to a bacterium causing Bumblefoot. The result is redness, swelling, and later lameness. Other problems include prolapse, Marek’s viral disease, and parasite infestation.

Earlier on, we mentioned that the Asian Black chicken is a descendant of the Langshan chicken. Therefore, most of the characteristics of this chicken tend to cross with those of its parent, the Langshan.

When it comes to the ideal raising environment, the Asian Black will thrive in the same environment as the Langshan. First, this chicken is hardy meaning it can survive in both cold and warm climates. Although it doesn’t have excessively fluffy feathers like the Langshan, its feathering is quite dense and capable of keeping its body well insulated. Also, as a single comb chicken, the Asian Black requires to stay warm to avoid getting frostbitten.

Regarding predator attacks, the Asian Black is considered a medium-sized bird that tends to fair well against predators. The roosters are known to be very protective and are reputed to be extremely brave when it comes to fighting with smaller predators. So, if you have some roosters in the flock, then you’ll rest assured that your flock is safe.

Lastly, Asian Blacks are chickens that enjoy free ranging and being confined. Therefore, these birds will live happily when confined or when allowed to free range. For this reason, it’s important that you prepare a big coop and run for them, and don’t forget to fence your backyard. 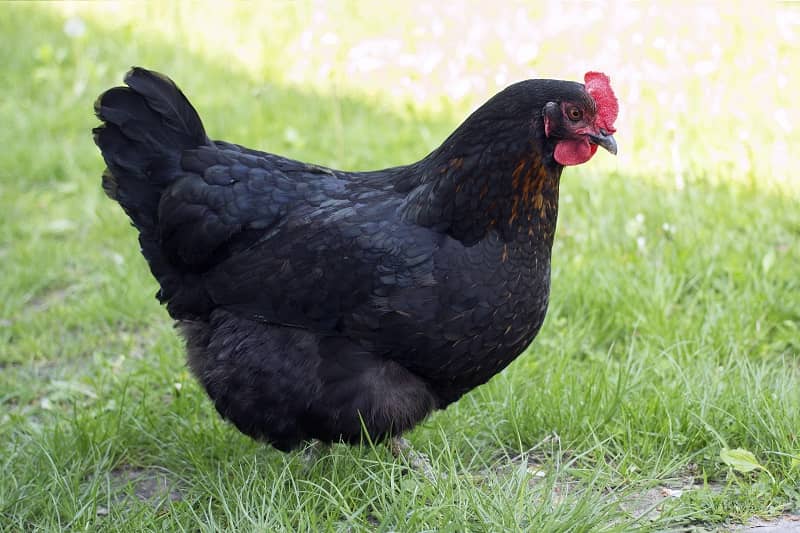 Generally, the Asian Black is not a hard chicken to raise. With its friendly personality and ability to adapt to various environments, this chicken can be raised by almost anyone including novices. However, for your flock to thrive, there are those factors you must consider. So, here, we’re going to discuss three major raising tips for these rare black chickens.

The Asian Black is a medium-sized chicken that demands a lot of coop space to thrive. Therefore, when raising this chicken breed, you must offer them ample coop space rather than confine them in an overcrowded space.

The same applies to an enclosed run where ample space is vital. In fact, this is very important considering Asian Blacks are free-range chickens that enjoy foraging for pasture on their own.

Now, Asian Black roosters have charming bravery that pushes them to face predators head-on even when they’re the obvious underdogs. Since their role is to protect the flock, they will fight to the death rather than watch the flock suffer. This is one reason why you might lose a rooster.

So, to avoid this, you should fence your enclosed run or the backyard with a high fence that will prevent predators from sneaking through.

Now, due to their Asian Black name, it’s easy to wonder what color of eggs these chickens lay. If this is what is troubling you, then Asian Black chicken eggs are brown. These eggs are also medium-sized and very nutritious.

Just like the Langshan, the Asian Black is a breed that rarely gets broody. I think these chickens utilize most of their energy in laying eggs rather than being mothers. However, a small fraction of these chickens can go broody in which case, they make excellent mothers.

No, they don’t. Now, if you search for Asian Black chickens, most of the information you’ll get is related to the Ayam Cemani. That’s because this chicken breed is more popular than the Asian Black. Therefore, most people tend to get disturbed wondering whether these two chickens share the same specs. About their meat, Asian Blacks have white skin hence white meat.

Q4. What Are Black and White Chickens Called?

The Black Asian chicken is a rare and new breed of chicken that’s yet to be standardized by the APA. However, most American hatcheries such as the Hoovers Hatcheries are selling this breed to enthusiasts meaning you can get some chicks if you want to.

The best thing about this breed is that it’s a sex-links or autosexing chicken that’s easy to sex the chicks when they’re a day old. This chicken is friendly and easy going making it an awesome backyard breed. It’s a dual-purpose chicken that can be raised for both meat and eggs and it’s warm and cold hardy meaning it can tolerate various growing conditions.