If you’re lucky enough to raise an Ameraucana chicken, then you’re aware of how beautiful and unique this bird is. Its temperament, cool features, and colored blue eggs are among the features that make the Ameraucana a sought-after breed among most poultry farmers. However, if you consider most suburban and urban settings, raising roosters is hugely discouraged. For this reason, differentiating Ameraucana rooster vs. hen is critical to avoid landing yourself in trouble.

If you’re raising your flock in rural areas, you might not have a problem with this. But again, knowing how to distinguish male from female chickens is important. This process is known as sexing and is very important if you’re hatching chicks for sale.

How Do You Identify if an Ameraucana Is a Rooster or Hen?

Before we get to that, the Ameraucana is a descendant of a blue egg-laying chicken most specifically the Araucana. One of the major reasons for crossbreeding the Araucana with other breeds was to get a chicken breed that would fix a few health flaws suffered by the Araucana.

Something else about this chicken breed is that it resembles the Easter egger, especially when it comes to laying bluish greenish eggs. So, when differentiating it from an Easter egger, you have to examine the physical characteristics very carefully.

Lastly, most newcomers raising the Ameraucana chicken breed tend to get confused when differentiating roosters from hens. Although we’ll discuss this in detail, you can examine the sex of adult Ameraucana chickens by looking at the physical characteristics, behavior, body size, feathers, and weight. 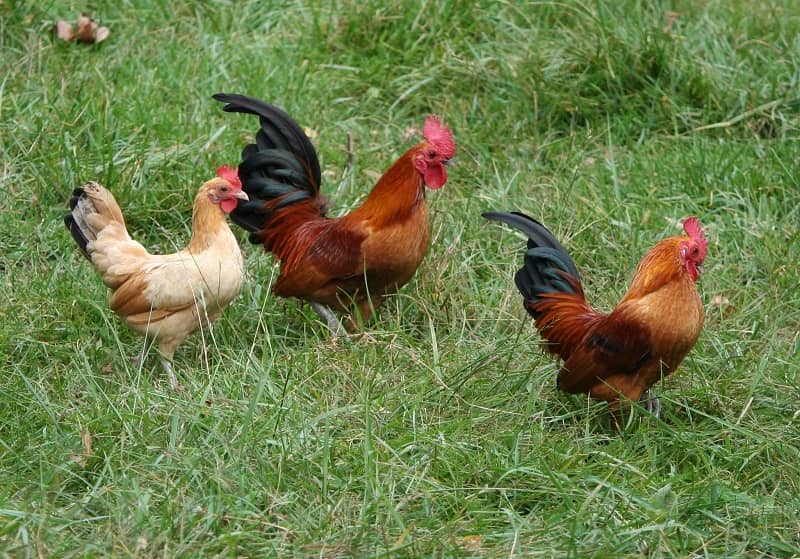 The Ameraucana is among the most interesting chicken breeds to raise in your backyard. Some people raise them for ornamental purposes, especially their bluish greenish eggs, while others raise them as pets thanks to their friendly temperament.

The first way to differentiate an Ameraucana rooster from a hen is by observing the behavior of both chickens. Initially, the Ameraucana is known to be friendly and very docile. In fact, that’s one of the reasons why most farmers raise them as pets.

But, despite that, looking at these birds keenly, you’ll notice that some of them will appear to strut around the coop or backyard. Such chickens are males. You see, roosters have aggressive, protective, and territorial instincts.

They like impressing their “women” and in most cases, they’re the ones that search for food and call the rest of the flock to feed. The roosters are also very friendly towards humans and you’ll occasionally see them getting too close to you. This behavior is different from hens, which tend to keep to themselves. 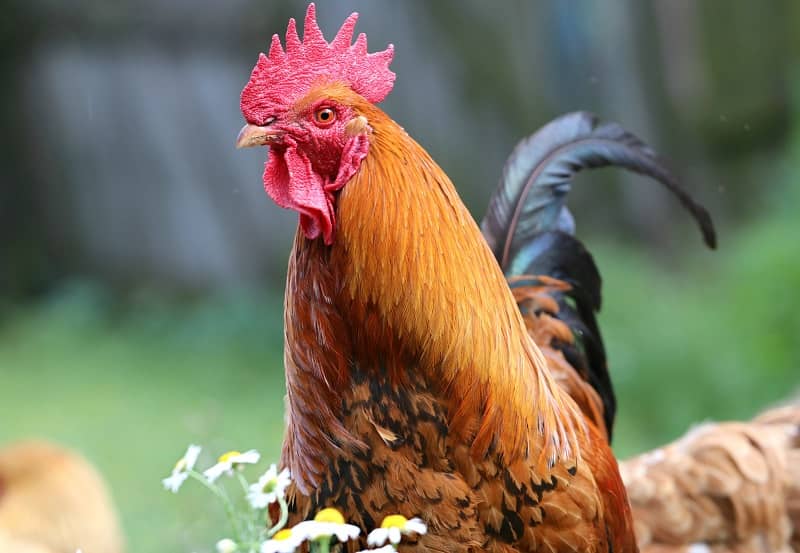 One of the surefire ways of telling the difference between roosters and hens is by examining the combs and wattles. The comb is the red fleshy meat at the top of a bird’s head while the wattle is the fleshy meat that hangs under the chin.

Now, when it comes to the Ameraucana breed, judging the sex of the chicken by looking at the comb and wattle can be tricky, especially if you’re used to raising other breeds of chicken. That’s because the combs and wattles of these breeds don’t get too large and pronounced.

Another way to distinguish Ameraucana roosters from hens is by looking at the feathers. First, you need to note that this chicken breed comes in eight different colors depending on the breeds they’re crossed with. These colors include Black, White, Blue, Blue Wheaten, Wheaten, Brown Red, Buff, and Silver.

Other than the weight, the sex of the Ameraucana breed can be distinguished from the height. Again, the roosters will tend to get taller than the hens. However, this factor is quite tricky to determine, as you’ll have to wait until the chickens are fully mature.

Although chickens are different, roosters will start crowing when they’re 6-7 months old. The worst thing about this crowing is that it can cause a nuisance, especially if you’re in an urban center. Therefore, you need to learn how to identify the roosters early when they’re still chicks. More of this will be discussed in the next section.

The last obvious way to differentiate an Ameraucana hen vs. rooster is the use. Although it sounds bizarre, you can try to wait until your chickens lay eggs to distinguish roosters from hens. Anyway, hens are the ones that lay eggs while roosters are used for fertilizing the eggs or for meat production.

Unless you’re an expert, sexing Ameraucana chickens when they’re chicks is very difficult. Some experts use the “vent sexing” technique where they squeeze feces from the chicks’ vent to determine their sex. Although the technique works, there are times when one or more chicks turn out to be male.

So, whether you’re running a hatchery or you’re buying chicks to raise, here are some ways you can determine the sex of your chicks depending on the age.

Unless you use the vent sexing technique, which of course requires experience, it’s almost impossible to distinguish males from females when chicks are just 0-6 weeks old. At this stage, the chicks appear to look alike and grow at the same pace.

When chicks are 6-8 weeks old, it’s easy to identify some slight differences that help you tell which ones are males and which ones are female. Though not a guarantee, you’ll notice that males have redder combs and wattles as compared to females.

From 10-12 weeks moving forward, it’s easy to identify blue Ameraucana rooster vs. hen. At this age, the chickens will develop more adult features that are easy to tell whether they’re male or female. If you have mature chickens, then this is much easier as you’ll only need to compare the features.

So, other than the comb and wattle, other features you’ll see here include the size of the feathers, which will be larger and more pronounced in roosters than in hens. 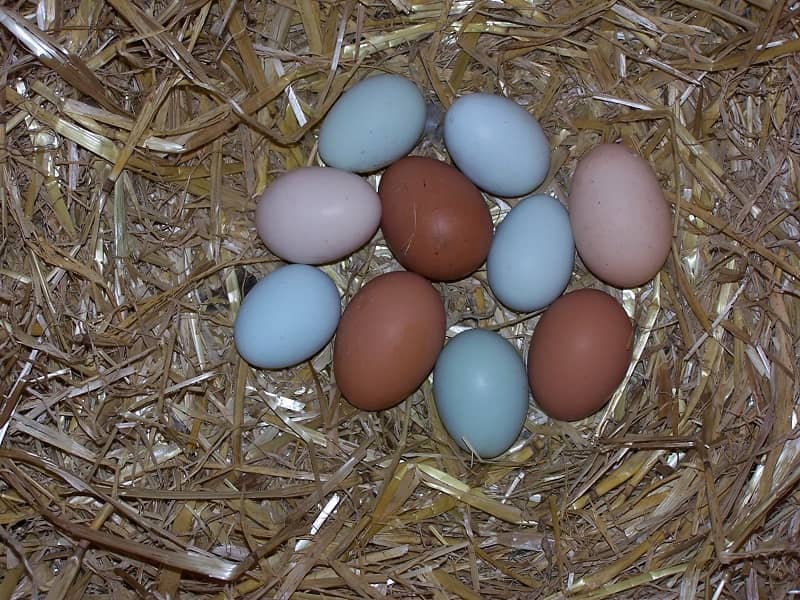 When it comes to laying eggs, the Ameraucana chickens are considered excellent egg-layers that produce around 3-4 eggs weekly and about 150 eggs annually. This range makes these birds the best for backyard chicken owners and not for commercial production as the egg production is quite low.

Nonetheless, these chickens have something interesting about their eggs—they lay blue eggs. So, if your chickens are producing eggs of different colors, then they’re not pure Ameraucana breeds.

Now, telling the difference between the Ameraucana chicken rooster vs. hen is very difficult. That’s because, at such a young age, chicks are yet to develop most of the features that distinguish males from females.

Most experts in hatcheries use the vent sexing method to distinguish males from females. Since this method is 90-95% precise, most farmers swear by it. However, if you’re not sure about this method, then you can use other methods such as checking the size and color of the comb and wattle. 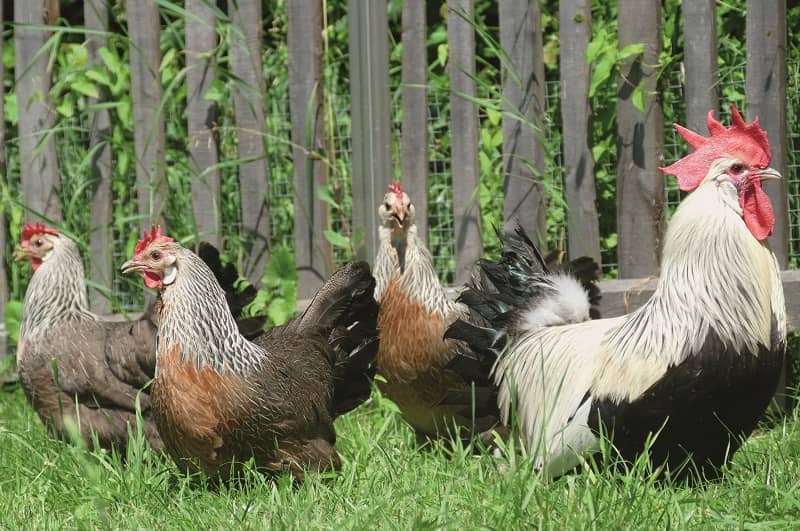 Now, for your chicken to be accepted as a pure Ameraucana breed, it must possess the following characteristics. First, the chicken must have one of the following acceptable colors: Black, White, Blue, Blue Wheaten, Wheaten, Brown Red, Buff, and Silver.

Two, your chicken must possess the following traits:

When it comes to laying eggs, the Ameraucana pullets begin the egg-laying journey when they’re 6-7 months old. Now, this is considered quite late when compared to egg-laying hybrids such as Leghorns, Golden Comets, Rhode Island Reds, and Australorps among others.

On the flip side, the Ameraucana chicken is believed to lay eggs much earlier than common breeds such as the Silkie, Polish Hen, Wyandotte, and Plymouth Rock among others.

Now, Ameraucanas are chicken breeds that have minimal health issues. In fact, the only problem with these chickens is mite and lice infestation that tend to attack their muffs and beards. Thankfully, with proper care and treatment, these birds can last for up to 7 or 8 years.

Q4. When Do Ameraucana Roosters Begin to Crow?

Ameraucana cockerels mostly start crowing at the same time when pullets begin laying eggs. This is usually around 5-6 months old. At this age, you’ll hear your roosters trying to crow which eventually turns into a loud “cock-a-doodle-doo”.  Earlier in this discussion, we mentioned crowing where we said it’s among the surefire ways of determining whether a chicken is an Ameraucana rooster.

Yes, they are. Although they’re not recognized as pure breeds, Ameraucana hens are excellent brooders. The hens lay eggs and collect them in their nests before sitting on them later. 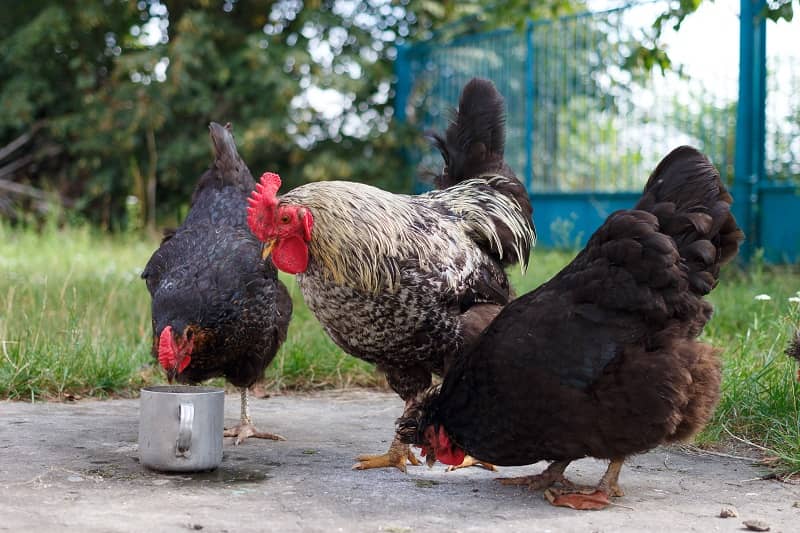 As you can see, the Ameraucana chickens are fun to raise thanks to their friendly temperament and docile characteristics. They have distinctive looks and personalities that set them apart from other breeds.

However, when it comes to Ameraucana hen vs. rooster, things get a little bit nasty as most people are unable to distinguish them, especially when they’re young chicks. For that reason, this guide has discussed ways you can distinguish adult roosters from hens, cockerels from pullets, and male/female chicks.

So, in case you’ve been struggling to tell male from female Ameraucana breeds, then perhaps you’ve found an easier route.

5 thoughts on “Ameraucana Rooster vs. Hen (The Ultimate Differences Explained)”